The Three Billy Goats Gruff is an arrangement by John Davies. A fun-filled, short family-friendly opera, it uses famous opera tunes by Mozart, Rossini and Donizzeti.

The Three Billy Goats Gruff was produced by Prelude Opera in 2019 and was made possible in part with funding from the Upper Manhattan Empowerment Zone Development Corporation and administered by LMCC.

UMEZ enhances the economic vitality of all communities in Upper Manhattan through job creation, corporate alliances, strategic investments, and small business assistance. LMCC empowers artists by providing them with networks, resources, and support, to create vibrant, sustainable communities in Manhattan and beyond. 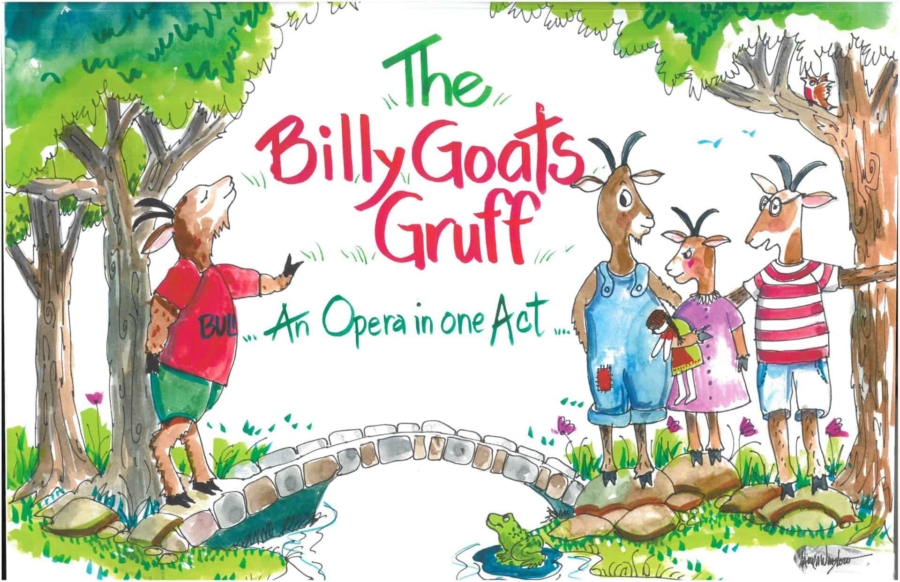 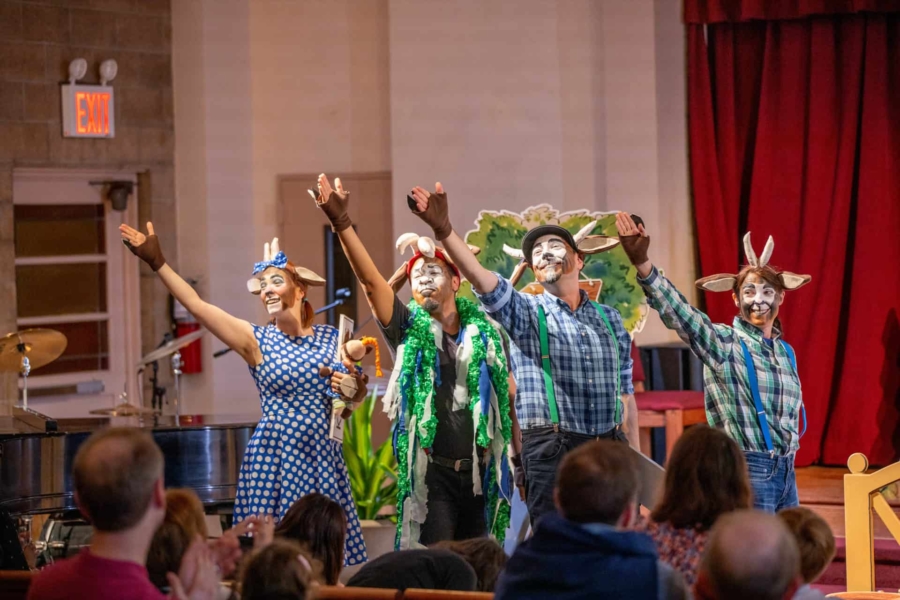 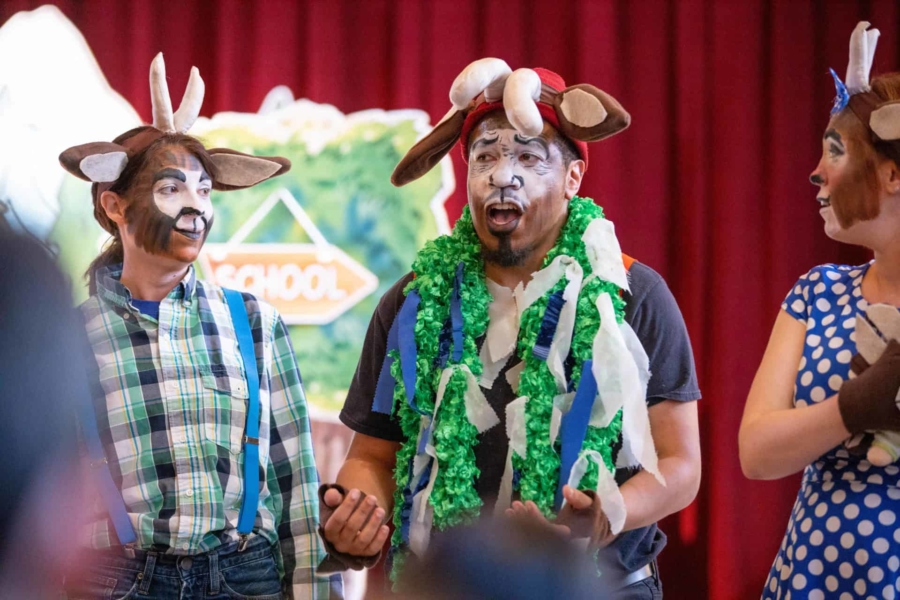 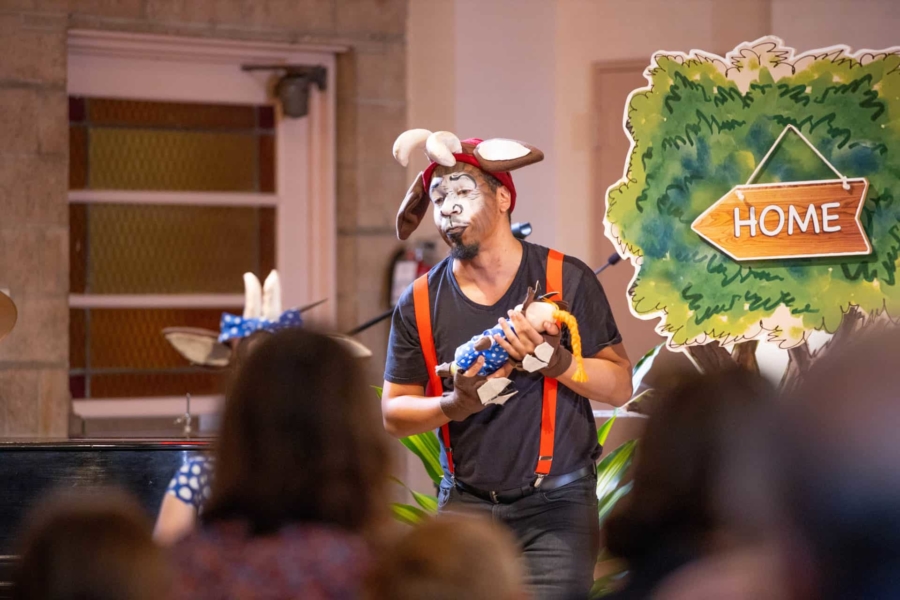 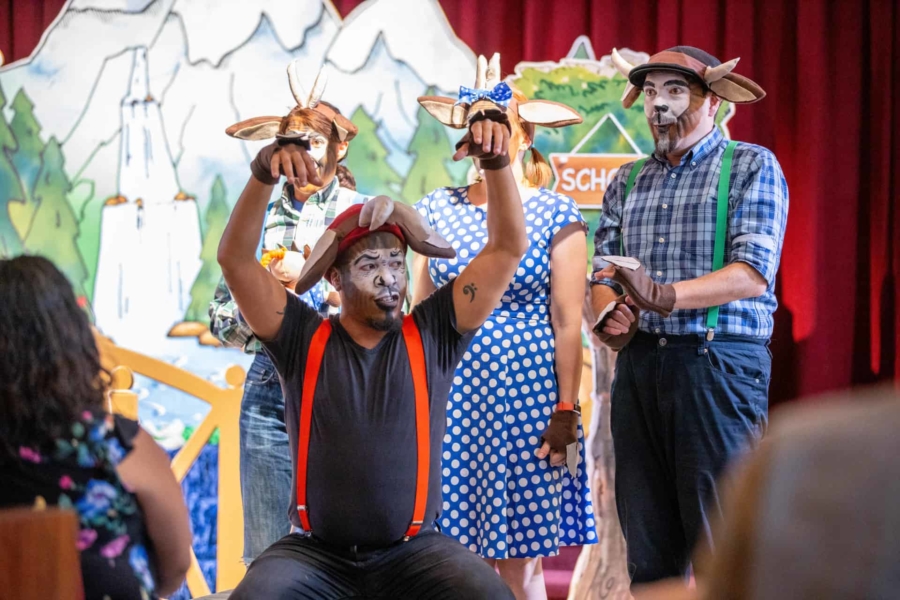 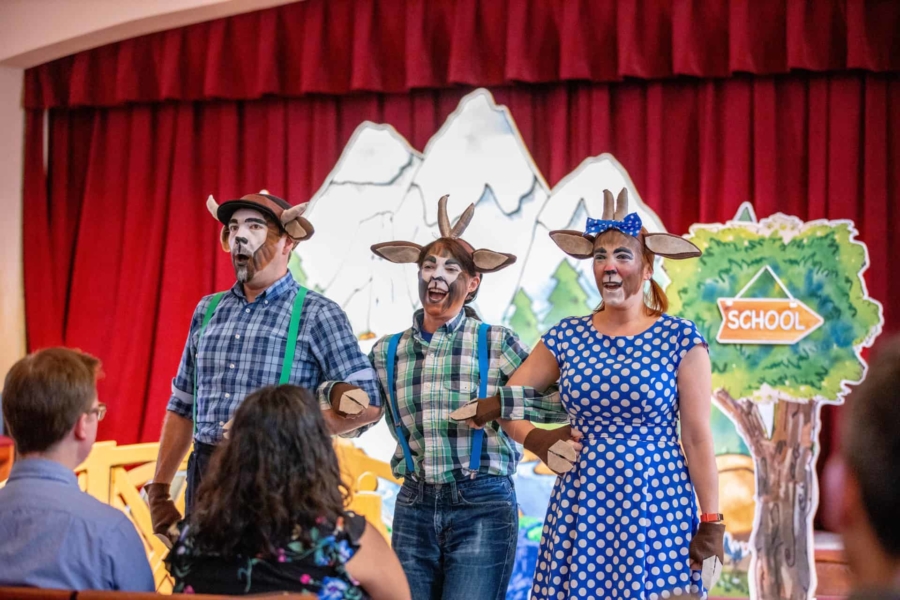 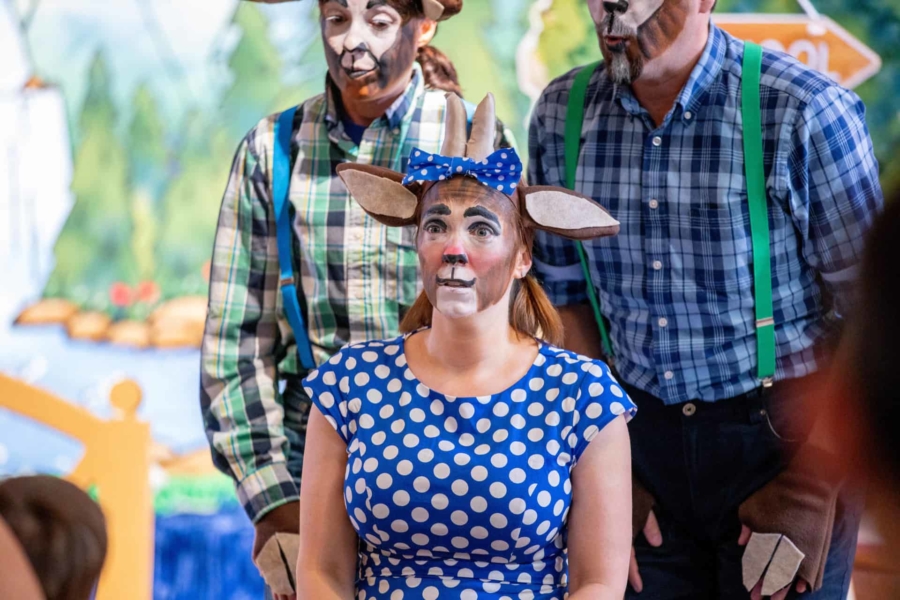 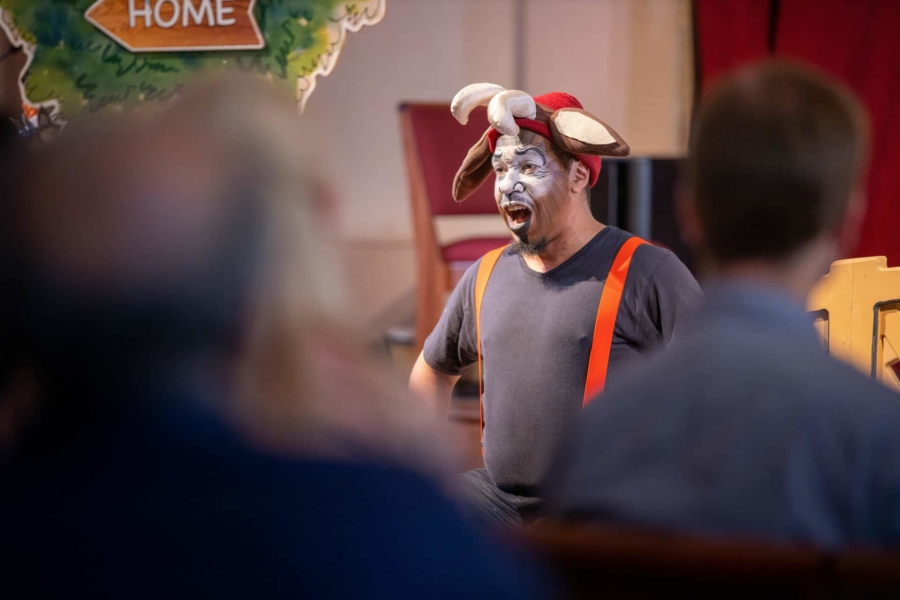 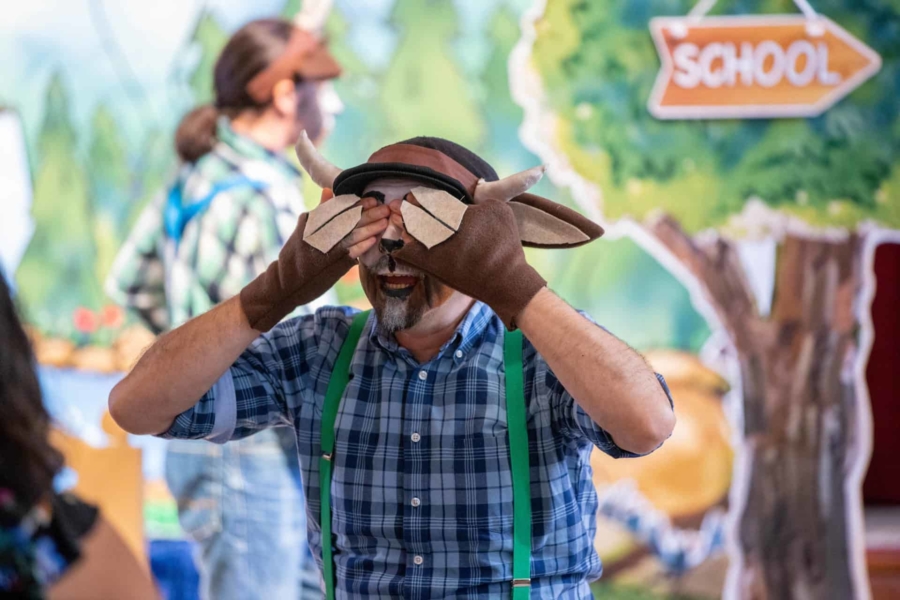 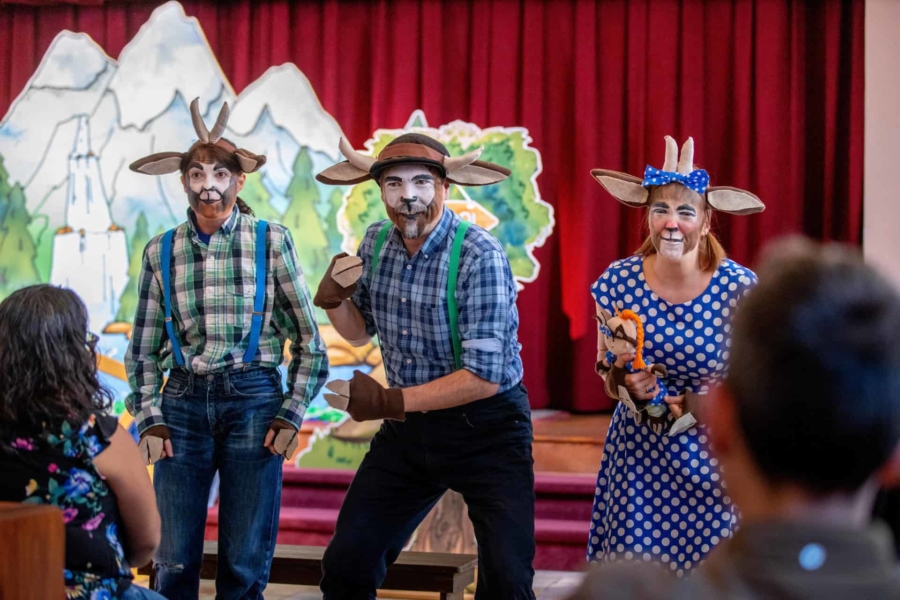 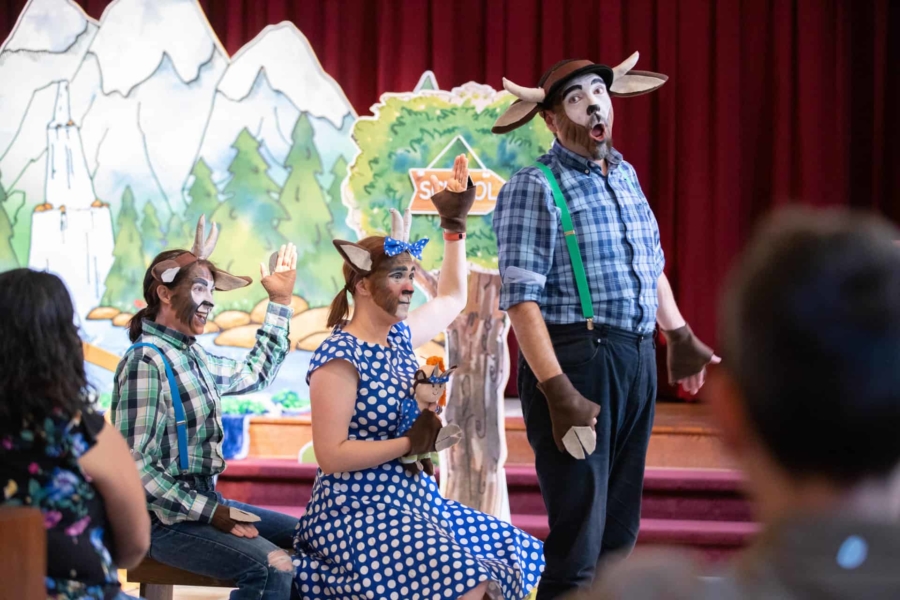 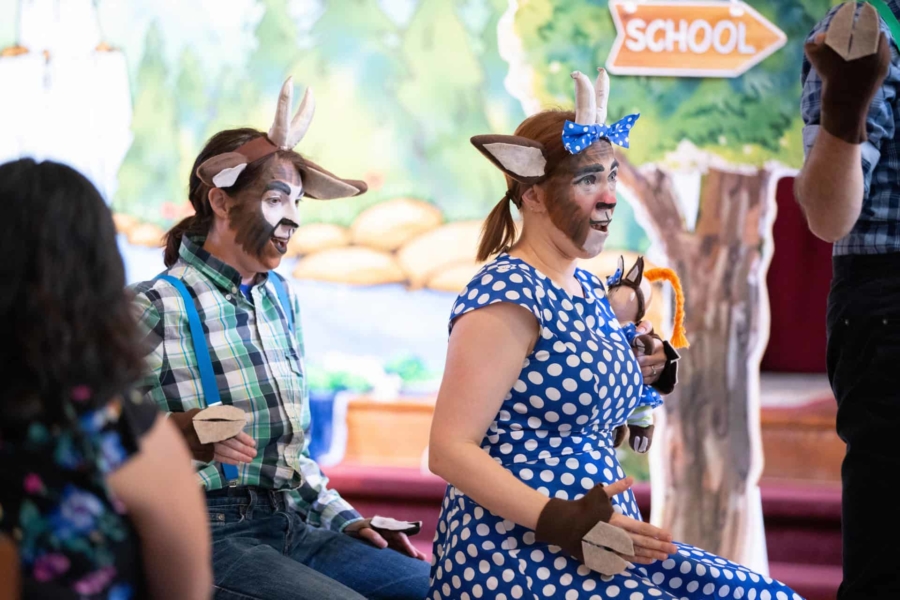 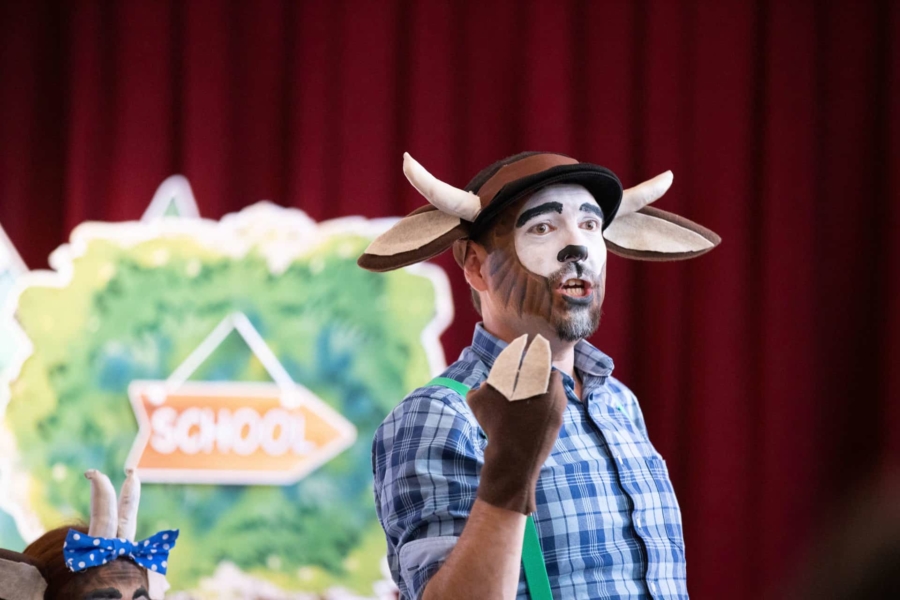 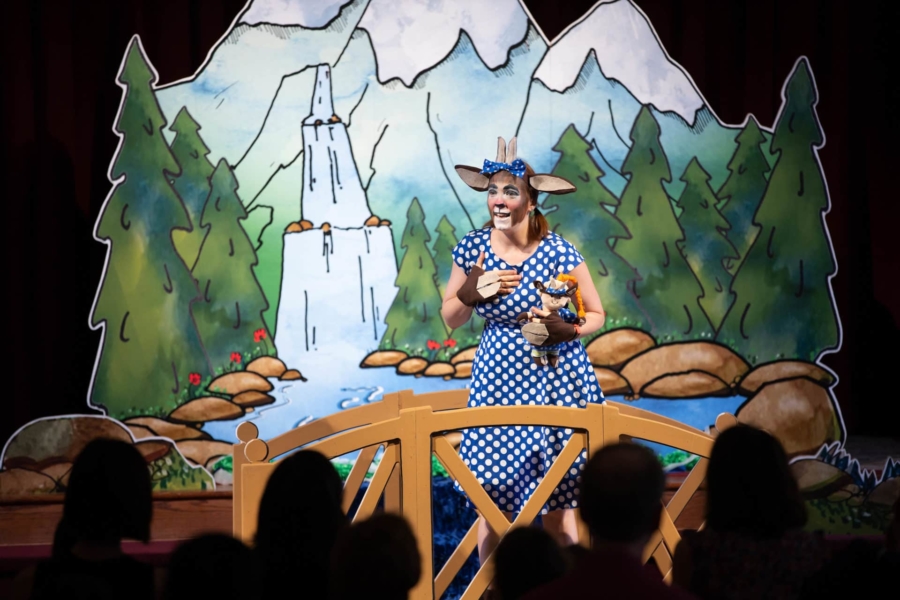 Photos and Videos by Jonathan Rothermel | Artwork by Laura Winslow

Pianist Christine Pulliam Melamed performs as a soloist, chamber musician, and accompanist. Since moving to NYC in 2010, she has developed an opera coaching career, working for the Atlantic Music Festival, Masterworks Festival and Opera Company of Brooklyn. As music director of the opera company Dramma per Music, she directed Don Giovanni, Xerxes, Giulio Cesare, and Ariodante. She has instructed piano for 23 years and is currently a lecturer of piano and music history at The King’s College in New York City. Previously, she was on the piano faculty of the Levine School of Music in Washington D.C. A fan of new music, she has premiered works by Frank Felice, Benjamin Boyle, and Joshua Bornfield. Past performances also include the Opus Nine Ensemble, Académie Francis Poulenc in Tours, France, the Vancouver International Song Institute, the Kennedy Center of Washington D.C., The Washington Sinfonietta, University of Wisconsin, and Malacañang Palace in the Philippines. A native of Indianapolis, she graduated from Butler University

Before beginning work as a freelance director, Spierman worked for the Bronx Council on the Arts as their Grants Coordinator and as the Founding Director of their Business Center for the Arts. He subsequently began working across the country as a Stage Manager and Assistant Director. In those capacities, he worked for Central City Opera, Indianapolis Opera, Light Opera Oklahoma, Mississippi Opera, Mobile Opera, Opera Theater of Saint Louis, Palm Beach Opera, Rogue Valley Opera, and Virginia Opera. Most notably, he was the Assistant on the Saint Louis’s Lewis and Clark Bicentennial premiere production of Dream of the Pacific, and on Central City’s American première production of Britten’s Gloriana.

Spierman currently serves as General Director at Bronx Opera, where he has directed numerous productions, included among which are critically-acclaimed New York première productions of Kirke Mechem’s The Rivals, Vaughan Williams’ The Poisoned Kiss, the Weber/Mahler posthumous collaboration Die drei Pintos, Marc Blitzstein’s American Verismo opera Regina, and Puccini’s Il tabarro in a joint production with North Shore Music Festival, where he also serves as Resident Stage Director and has led productions of The Elixir of Love, Rigoletto, Don Pasquale, Pagliacci, Il barbiere di Siviglia, and a double-bill of Il tabarro and Gianni Schicchi. Also a frequent guest director at companies throughout the United States, Spierman’s recent engagements include Madama Butterfly and The Merry Widow at Indianapolis Opera; Turandot and Don Giovanni at Dayton Opera; Tosca and The Pirates of Penzance at Imperial Symphony Orchestra; Norma and Roméo et Juliette for St. Petersburg Opera; Die Zauberflöte for Opera Idaho; Carmen at Northern Lights Music Festival; Les contes d’Hoffmann and Die Fledermaus at Opera in the Heights; Hansel and Gretel and Gianni Schicchi / Buoso’s Ghost at Amarillo Opera; and La bohème with Syracuse Opera. Other work in and around New York City includes Verdi’s Falstaff and Massenet’s Cendrillonfor Rutgers University (both winners of National Opera Association prizes); Amahl and the Night Visitors for Opera Company of the Highlands; and a blackbox production of Ariadne auf Naxos for the NYC’s dell’Arte Opera Ensemble (winner of the American Prize for Opera).

A sought-after dramatic coach, Spierman has worked with singers at the Westchester Summer Vocal Institute, the Buck Hill-Skytop Music Festival, and the Opera Breve Vocal Intensive, in addition to coaching privately. Also an adept singer and actor, his recent stage appearances include King Hildebrand in Gilbert & Sullivan’s romping comedy Princess Ida at Utopia Opera, Reverend Hale in Arthur Miller’s The Crucible with the City Island Theater Group, and Frosch in his own production of Die Fledermaus at Opera Idaho. Mr. Spierman is a native of New York City and resides in The Bronx with his wife and frequent artistic collaborator, soprano Hannah Spierman.

Hailed by the Jerusalem Post as “A Magnificent Dramatic Voice” versatile mezzo-soprano Sara Henry has sung leading and supporting roles in over 40 operas, and has been seen in concert throughout Europe, Asia, and North America. Ms Henry began her formal vocal studies at La Scuola di Musico di Sesto in Florence, Italy, and later went on to graduate from Sarah Lawrence College, where she made her debut as the alto soloist in Bach’s Weinachts Oratorio, with the Sarah Lawrence College Orchestra, under the baton of Grammy-winning composer, George Tsontakis. Highlights of her career have included the roles of Semiramide (Semiramide), Donna Elvira (Don Giovanni), Orfeo (Orfeo ed Euridice) Diana (La Calisto), Adalgisa (Norma), and Giovanna Seymour (Anna Bolena), as well as a host of Handelian heroes, including the title roles in Xerxes, Ariodante, and Giulio Cesare.  Ms. Henry also had the honor of portraying the dual roles of Azelia and Claire in the Canadian premiere of African-American composer William Grant Still’s seldom performed opera, Troubled Island. In addition to her ext, Ms. Henry has served as a general director of NYC based opera company Dramma per Musica, dedicated to putting on entertaining and innovative productions that speak to the truth of the human situation without sacrificing the aesthetic integrity of the music.

Previous appearances include Dandini in La Cenerentola with both the Bay View Music Festival and Opera Theatre of Montclair, Schaunard in La bohéme with both Regina and Amore Opera, Leporello in Don Giovanni with Lighthouse Opera, Mercutio in Roméo et Juliette with West Side Opera Society, the title role in The Sorcerer with Utopia Opera, Pish-Tush in The Mikado, and both Kuno and the Ottokar cover in Der Freischütz with hometown company Bronx Opera, the Badger/Parson in The Cunning Little Vixen, Le Baron de Pictordu in Pauline Viardot’s Cendrillon, both with dell’Arte Opera Ensemble, Donald Wilkinson in the World Premiere of Keepers of the Light with the Nahant Music Festival, Magaldi in Evita with the Bay View Music Festival, and a month-long run on City Island as the title role in Sweeney Todd. He has taken on cover assignments that include Melisso in Alcina with OperaRox Productions, Adonis in New Camerata Opera’s Venus and Adonis, Belcore in North Shore Music Festival’s Elixir of Love, Tsarevich Afron in New Opera NYC’s Zolotoy petushok, and the 2018 World Premiere of Thea Musgrave’s monodrama, La vida es sueño.

He has appeared in abridged, child-friendly performances of both La Cenerentola and The Magic Flute with Opera Theatre of Montclair as Dandini and Papageno, respectively, and looks forward to playing the bully, Osmin, in Prelude Opera’s production of Three Billy Goats Gruff.

He holds a Bachelor’s degree in Creative Writing from Susquehanna University, where he studied with baritone Jonathan Hays.

Hailed as a “soaring, vibrant sound,” soprano Elizabeth Westerman Yoder is recognized as a versatile singing actress with thrilling high notes and a strong commitment to character.  She is very happy to be singing in her neighborhood with Prelude Opera.

Recently, Elizabeth has enjoyed a return to more oratorio performances, singing as the soprano soloist in the Saint-Säens Christmas Oratorio, the Rutter Requiem, the Brahm’s Requiem, Peter’s Psalm of Joy, Charpentier’s Te Deum, Handel’s Messiah and many other sacred works.  In the operatic realm, Elizabeth has sung mainstage roles with Performance Santa Fe (Pamina), covered roles with Fort Worth Opera (Zerbinetta, Ariadne and Marie, Daughter of the Regiment) and Opera New Jersey (the Foreign Woman, the Consul).  At ONJ, she performed scenes as Lucia and Sophie, and sang in concert and on recital.  As a Resident Artist with the Seagle Colony, she was seen as Tallulah in Pasatieri’s Hotel Casablanca.  Here in New York City she has performed as Juno and Spring in Purcell’s Fairy Queen with Dell’Arte Opera and with VHRP LIVE! in the company of Eileen.  Other performance credits include the roles of Cleopatra, Adele, Gretel, Mademoiselle Silberklang, Le Rossignol, Gianetta and Rapunzel.

Jay Lucas Chacon is a NYC based opera singer originally from Phoenix AZ. Jay has worked as a teaching artist for the Bronx Opera, presenting classes and discussions of music as well as drama classes to a range of people from children and teenagers to special needs. Jay has also been a member of New Camerata Opera’s branch of childrens operas, Camerata Piccola, performing MacGregor in Peter Rabbit and the King in Rumpelstiltskin.

Jay recently made his international debut in Montréal CA as a guest artist with the Institut Canadien;Art Vocal singing Rodolfo in the Leoncavallo La bohème. Career highlights have included creating the role of Sandrino in Salieri’s forgotten opera La cifra with dell’Arte Opera Ensemble, the Count in Capriccio with Apotheosis Opera, Inkeeper/Governor in Man of La Mancha with Cedar Rapids Opera Theatre, and covering Schaunard in La bohème with Saint Petersburg Opera Company.

Other performances include the Soldier in a reading of Scott Wheelers opera The Sorrows of Frederick with Center for Contemporary Opera, Schaunard with Long Island Opera Company, Alfio in Cavalleria Rusticana with Brooklyn Philharmonia Chorus, George Page in Sir John in Love with Bronx Opera, and Figaro in the Paisiello Il Barbiere di Siviglia for his debut with dell’arte Opera Ensemble.

Later this fall, Jay will tap into his Hispanic roots joining New Camerata Opera for their production of the zarzuela El Barbero de Sevilla in the role of Benito. Jay will also workshop his one-man show I Am Figaro in a collaboration with The Curiosity Cabinet, written and directed by Bea Goodwin. Jay has spent 3 summers with the Austrian American Mozart Academy in Salzburg, Austria where he sang Guglielmo in Così fan tutte, the title role in Le nozze di Figaro and Dr. Falke in Die Fledermaus. Jay also spent time in Austin TX performing with Cindy Sadlers program Spotlight on Opera where he sang the title role of Gianni Schicchi, Alfio in Cavalleria Rusticana, and Sam in Trouble in Tahiti.

April is a visual artist specializing in storytelling. She is inspired by the limitless potential of an undefined space. April is a freelance designer; projects include theater and opera design, television art direction, merchandising and exhibit design. She is an Art Director for The Today Show and an adjunct professor at Pace University and NY Tisch. Selected NY credits: A Pound In Your Pocket (A Charles Strouse NY Premiere); Wrap Your Heart Around It (Best Production NYC Solo Festival); The Adventures of Boy and Girl (NYC Fringe); Sousepaw, Font of Knowledge (Shelby Company); Megs New Friend, The Most Damaging Wound (The Production Company).  Love to DM&MB. Proud member of USA829. BFA, Emerson College / MFA, Carnegie Mellon.  AprilBartlettDesign.com